I love China, the old glory bond land with scars in recent history since the fall of Ming dynasty, a pinnacle of China history. then China launch a long road learning after the western. the Emperor of Ming dynasty had already an open interest on the other part of the world beyond its reach, with a marvelous trip around the half part of the globe. China is an narrow land under the lower part of the great Asia-Europe continent, and in no means its hero dynasties attempted to avoid the thread also hope of its inner land, the northwest of the homeland. To afford it it strove to sacrifice to meet the demand of the minor nomad tribe alien from mid Asia. In no way should modern China breaks the process to explore deep into the western world. even in the new republic of China, a premature byproduct of sinful Atheism originated from German & Russian, the dictator in his most inspiring period also devoted to learn after the western world advanced ahead. and what should we today maintain is to be a good learner of the western social culture architecture.

nowadays China in a close isolated dark land. its dictator enjoyed the stolen peace at the cost of its people and its due responsibility of passed glory. by no means we as a native Chinese should allow it to continue. we devoted to pick the broken process to learn after western culture as well as its best fruit, the scientific power and human right. we should learn to cope with smarter people and democratic political architecture. learn to live with the power roots and in its people's hands. we do devoted to promote democracy in China to broaden its road and options with changing world on this tiny planet. We follow God's shine once more in the union of beauty, Majesty, & glory of the Son. We sing one hymn under Heaven.

I born in Hubei Prov., central China. after graduated from Nankai Univ., 1991, I worked in an old style state-owned enterprise in northeastern China for more than 15 year, till now. I learned some skills of computer and TV in the process of being a crew, namely title & heading designer, of the cable TV branch of the company, QRRS, but had to give them up for my political view was unfavorable for the authority, and under China surveillance for a long time. I now freed up to devote to my site building as an outspoken of China democracy progress predefined by my glorious ancestor, Emperor of Ming Dynasty, the last native Chinese ruled nation & pinnacle of Chinese history.

A determined mind. under God's shine in recent years after I broke my heart for a girl collegian in Nankai Univ., where I attempted to gain a master degree several years ago. in office I was set idle and most of time now spending on my site building and the business to push democracy in China.
more of my profiles at:

I graduated from Nankai Univ., Tianjin, the twin tower of Beijing, Capital China, majoring Philosophy. I ran into the blizzard of 6.4, a students activism happened in Tiananmen Square back to 1989 among world decay of Communism. I love the enthusiasm people shown in the eventful tumor of decades' resent and redemption national wide under tyranny of fake faith or Atheism, and recognized that’s real source of life as well as of society itself. From then on I always see a different way for common Chinese people for their right unalienable. Unfortunately exactly the viewpoint freed hinders any promotion among my career ladders, which almost totally under control by bureaucracy in the dictating nation. I now almost full free of any routine tasks to make a living: I was offered about 1000 rmb (￥1800 since Mar 2011) to be idle all time at office. I enjoy my fate to witness democracy process growing in China, on this once glory bounded shattered soil and land.
—— A piece of autobiography from benzrad 朱子卓, my web publish elsewhere.眸子的星芒浮于薄霭
厌倦的兽眼阴雨里低低沉吼 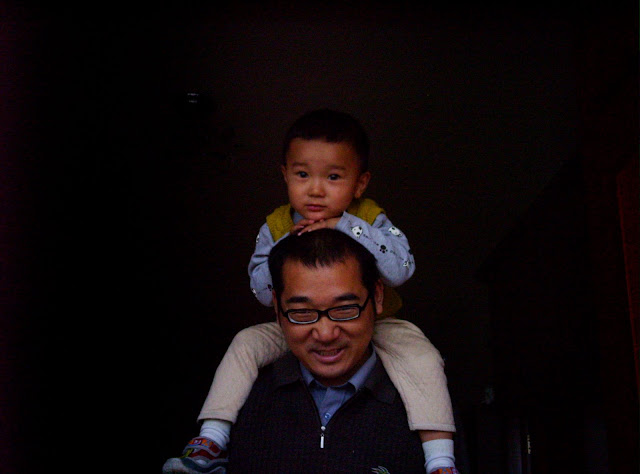 From Golden Memory in Garage
in this photo: such a grand relax with my best beloved baby son, warren zhu, hope of China and God of universe, just before i was sent to Zhudajiu, my hometown and trapped in asylum again soon after arriving the village where my grand dad just passed by.